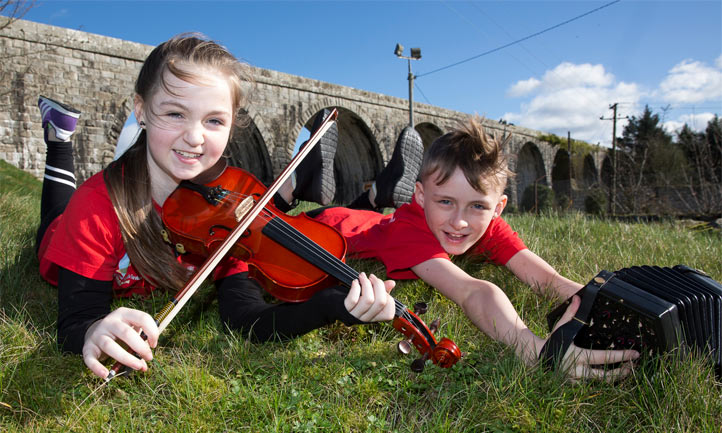 Moreover, this next phase of Music Generation has been assured of long-term sustainability following a commitment by the Irish Government, through the Department of Education and Skills, to co-fund the new areas into the future, together with Local Music Education Partnerships.

Currently Music Generation creates access to high-quality, subsidised music tuition for more than 41,000 children and young people annually in 12 areas of Ireland (Carlow, Clare, Cork City, Laois, Limerick City, Louth, Mayo, Offaly/Westmeath, Sligo, South Dublin and Wicklow). This ‘first phase’ of the programme was seed-funded through a €7m philanthropic donation by U2 and The Ireland Funds in 2009.

In January 2017, just over a year after confirming plans for further expansion, Music Generation launched an open national call for applications from new Music Education Partnerships to participate in ‘Phase 2’. As a result of U2 and The Ireland Funds’ combined donations, a total of 9 new areas will soon be selected for participation and rolled out on a phased basis between 2017 and 2021.

Speaking of this milestone achievement for music education in Ireland, U2’s The Edge said: ‘This is a really important moment for Music Generation. Our ambition is for every child and young person in Ireland to have access to tuition and this next phase of expansion brings us ever closer. Huge thanks to both the Government and The Ireland Funds for their ongoing commitment to a programme of which we, as a band, are immensely proud.’

Chairman of The Ireland Funds America, John Fitzpatrick, commented that: ‘We are delighted that Music Generation has reached this latest milestone. It has been our privilege to support this outstanding project for the last 7 years and to see it unlock the talent of 41,000 young people across Ireland. Its success is a tribute to the creativity of our young people and the generosity of our donors.’

Kieran McLoughlin, Worldwide President and CEO, The Ireland Funds, said: ‘Music Generation is a wonderful Public Philanthropic Partnership making a huge difference to hundreds of communities. We are most grateful to Bank of America for joining U2, ourselves and Government in bringing this great project to thousands more children across Ireland. We look forward to working with Government to build upon the remarkable success of the programme to date.’

Minister for Education and Skills, Richard Bruton, TD, commented: ‘My Department whole-heartedly supports access to performance music education for Ireland’s children and young people and currently invests €2.5m annually in Music Generation. We are delighted to work in partnership with U2, The Ireland Funds and Local Music Education Partnerships to extend this access into new areas of the country. By co-funding the new phase into the future, Government is demonstrating its commitment to ensuring the future of non-mainstream music education in Ireland. Developing musical education is a great way to help children and young people to learn a new skill, gain confidence in themselves, and have a lot of fun while doing it.’

Brian Moynihan, Chief Executive Officer of Bank of America said: ‘We are pleased to once again work with U2 and The Ireland Funds to support Music Generation, which helps enrich education and contribute to the culture of Ireland. Our purpose is to help the communities where we live and work succeed, through the power of connections we can help them make.’

Responding to the announcement, Rosaleen Molloy, National Director of Music Generation, remarked: ‘We are immensely grateful for the extraordinary generosity of U2, The Ireland Funds and Bank of America whose commitment to invest a further €6.3m in the programme’s next phase will enable us to work towards our shared vision for universal access to music tuition for all children and young people in Ireland. It is through their ongoing, visionary leadership that we have already achieved such incredibly powerful outcomes for the children, young people, families, communities and many other partners with whom we work. We would also like to sincerely thank the Department of Education and Skills and Local Music Education Partnerships, without whose commitment to partnership-working and sustainable future co-funding none of this would be possible.’

Initiated by Music Network, Music Generation is co-funded by U2, The Ireland Funds, the Department of Education and Skills and Local Music Education Partnerships.