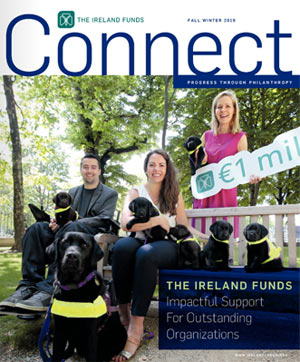 AsIAm
Adam Harris is a 24-year old social entrepreneur and Founder-CEO of AsIAm, Ireland’s national autism charity. Adam founded the organization In 2014 in response to his own experiences growing up in Ireland as an autistic person. The Ireland Funds have been key supporters of the Work of AsIAm from an early stage and in Connect magazine, Adam shares how The Ireland Funds’ support has been critical to the growth of the organization.
Download PDF

Good Shepherd Cork
Good Shepherd Cork works with women, children and families who are homeless, or at risk of homelessness. Good Shepherd Cork is the only agency in Cork that can admit and care for children who are homeless. The Ireland Funds is helping ensure no vulnerable woman or child is ever turned away. Support from The Ireland Funds has enabled women to stay in emergency accommodation and receive therapeutic support as well as education and personal development.
The grants have also allowed them to provide summer camp places for children staying in emergency accommodation.
Download PDF

Integrated Education in Northern Ireland
The Ireland Funds supported the establishment of Northern Ireland’s first-ever planned integrated school, Lagan College in 1981, and has been a longstanding partner and friend for almost four decades. The Ireland Funds was one of the first backers of innovative ‘Integrate My School’ Campaign, launched by Liam Neeson, to empower parents. A Flagship Award from The Ireland Funds has helped to ensure there is now more interest in transformation than ever before.
Download PDF

Irish Men’s Sheds
Men’s sheds are shared community spaces where men can exchange skills, make friends and contribute to their communities. They allow men to explore different approaches to masculinity, based on shared experience, frankness and openness to new ideas. As one member of the Men’s Shed in Co. Waterford, south-eastern Ireland put it: “If it wasn’t for the shed, I’d be a different person now. Over the past year, everything has changed. I don’t mind saying that I was in a pretty dark place this time last year. I don’t want to put it too dramatically, but I’d even say that the shed saved my life.” Thanks to a Flagship Award, the support of The Ireland Funds has allowed the Irish Men’s Sheds movement to grow to almost 500 sheds engaging over 12,000 men on a weekly basis.
Download PDF

Music Generation
Music Generation reached another milestone moment in May of 2019 when it announced its latest phase of expansion, opening the door to a brighter musical future for thousands more children and young people in five further counties: Kerry, Kildare, Longford, Meath and Tipperary. Today, Ireland’s national music education program, continues to create local access to affordable music tuition for their next musical generations, while also creating employment opportunities for professional musicians living within those communities.
Download PDF

Suas
Since 2012, Suas has helped over 5,500 children from the most disadvantaged communities in Ireland to improve their reading and math skills through one-to-one mentoring and smart learning materials. Over the past two years, with support from The Ireland Funds Australia and The Ireland Funds, it provided one-to-one support to 3,208 children and recruited over 1,000 volunteer mentors. In 2018, children on the reading program had an average rate of improvement of 210% relative to the national average and a 215% average rate of improvement on the mathematics program.
Download PDF

The Ireland Funds Business Plan Competition
In June of 2019, after six weeks of rigorous mentorship, ten teams took part in the Business Plan Competition in Belfast where they pitched their ideas and fielded questions from the panel of stellar judges. Lily Devices, led by NUI Galway student Aaron Hannon, won the top prize of €15,000 for their product that aims to prevent hair loss during chemotherapy using a unique headband device which offers patients a comfortable, dignified and portable treatment device.
Download PDF

A Conversation with Bill McKiernan
Bill McKiernan is President of WSM Capital LLC and is a San Francisco-based Board Director of The Ireland Funds America. In 2012, Bill founded The Ireland Funds Business Plan Competition which today has stimulated the growth of numerous young companies and initiatives across the island of Ireland. This past June, Bill helped judge the Competition held in Belfast, Northern Ireland. Rachel Alabiso, Editor of Connect Magazine, spoke with Bill to learn more about his motivations for establishing the Competition and his views on the importance of The Ireland Funds in Ireland, Northern Ireland, and beyond.
Download PDF

The Little Museum of Dublin
Until 2011, Dublin was the only European capital city without a city museum of its own. For a country with such a rich heritage, this made no sense. Thanks Flagship support from The Ireland funds, The Little Museum Of Dublin was created. Today, The Little Museum is an award-winning visitor attraction In the heart of the Irish capital. Since opening, the museum has welcomed over 600,000 visitors
Download PDF

Progress Through Philanthropy: Examples of Projects Supported by The Ireland Funds
The generosity of our donors has changed thousands of lives across the island of Ireland and around the world. The Ireland Funds has never wavered in its commitment to deliver private philanthropic support to worthy causes that promote peace and reconciliation, arts and culture, education and community development. On behalf of the organizations doing extraordinary work, we thank you.
Download PDF